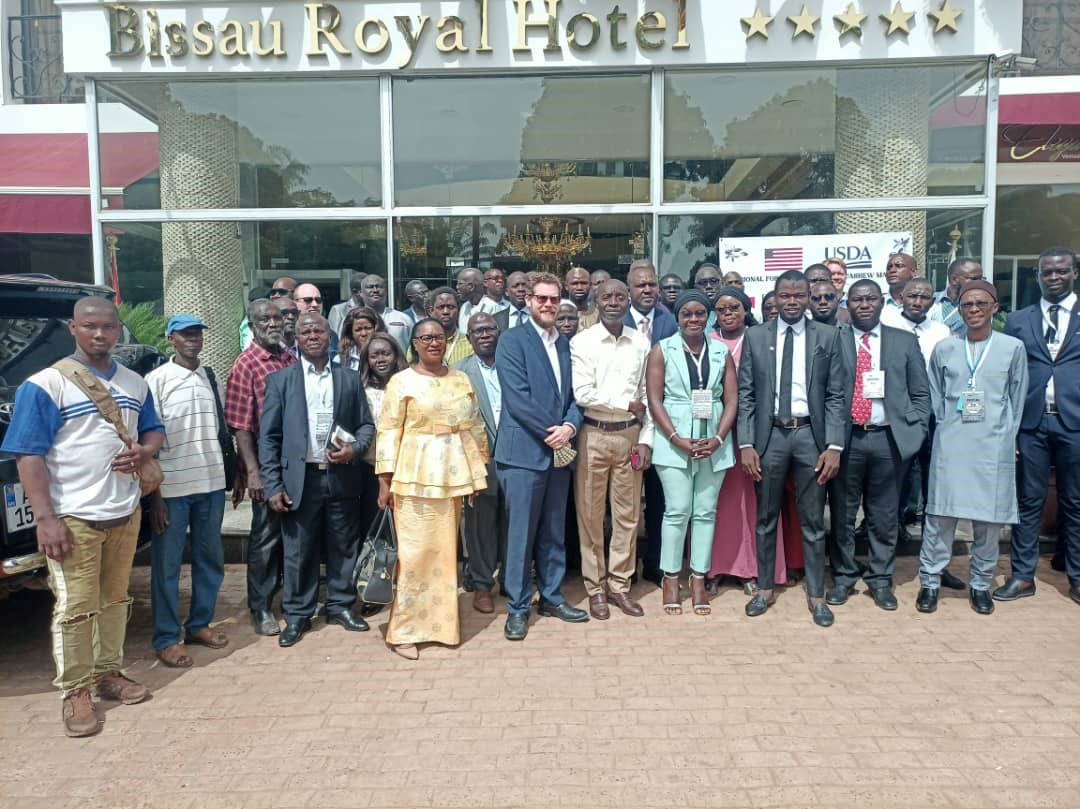 Shelter for Life International (SFL) is implementing a US$ 38 million, six-year project called “LIFFT CASHEW” in Senegal, The Gambia, and Guinea-Bissau (SeGaBi sub-region) that aims to develop and strengthen the necessary links in the cashew value chain to support an integrated regional trade network in the long term. On May 18,2022 LIFFT- Cashew organized a regional forum on cross border trade called “SeGaBi Single Cashew Market” in Guinea-Bissau. The Forum brought together senior government officials from the Ministry of trade, agriculture, chambers of commerce cashew apex organization and regulatory authorities. The forum brought to light the adverse effect of trade and transit restriction adopted by governments on raw cashew nut transit trade by road.

Unites States Department of Agriculture (USDA) was represented by Mr. Barret Bampus.He intimated that creating integrated regional markets is important to reducing transportation costs and creating a diversified market capable of creating jobs for the youth and women alike. Dr Djalo Secretary to cabinet Ministry of Commerce of Guinea-Bissau remarked that Cashew is close to the Bissauans hearts as it is the principal source of income for thousands of households and the financier of government annual fiscal expenditure, he explained.

During discussions participants agreed that governments of the three countries should pursue policies that foster market-led development and regional integration of cashew sector. They remarked that lift of trade restriction of raw cashew nut by road coupled with policy harmonization is central to laying the foundation for single cashew market. They furthered that government should and – can – galvanize this framework in close collaboration with LIFFT-Cashew Project.

Mr Kabba Baldeh Regional Government Liaison Officer (Policy) also buttressed on the need for countries to exchange and learn from each other best practices in policy advancement. He argued that Warehouse Receipt System (WRS), Cooperative Movements, and Cashew Regulatory Authorities are already good start-ups for policy harmonization and exchange on good practices. He explained that Senegal has made good advancement in WRS and can guide for its appropriation in The Gambia and Guinea-Bissau. Equally The Gambia has made significant policy development in cooperative movements and can replicate it in Senegal and Guinea-Bissau. Whereas Guinea-Bissau has an established cashew regulatory authority which have four (04) laws geared towards improving regulatory environment. This set up can be shared with Senegal and The Gambia. These exchanges are important to not only speed up policy implementation in respective countries but also to improve policy harmonization in the cashew sector, he concluded.

The Forum culminated to signing of a statement of intent between the Chamber of Commerce of Ziguinchor and Chamber of Commerce of Guinea-Bissau agreeing to engage in developing institutional relationship, cross border trade facilitation on raw cashew nut. The two chambers of commerce also further agree to re-enforce industrial competitivity through the harmonization of policies and building an integrated market that is punctuated by access to finance for private sector players.

In his concluding remarks Mr Barret posited that regional trade is indispensable to the economic growth in the region. He sums it up by using a proverb “A Raising Tide Lifts all Boats”. In the Chief of Party Shelter for Life wrap up discussion, he advised stakeholders to build on the momentum of forum’s ultimate goal: creating a Trade Corridors Without Borders OR SeGaBi SINGLE CASHEW MARKET.