Bala Sadio lives in Djibanar, a community affected by a decades-long conflict between the separatist rebel group Mouvement des Forces Démocratiques de la Casamance (MFDC), and the Senegal government. Bala was just two years old when the conflict started, and witnessed many of its effects on his village, including raids and shootings. “The rebels set fires in all the shops, every single one, and even in people’s houses. They stole everyone’s food, and all the animals.”

Bala says that even when Djibanar was not under direct attack, fear that the MFDC might be near kept people from doing the things they usually did to provide for themselves. Bala made his money by growing mangoes and cashews, but he had to stop going out to the plantation—and watch his money dry up—when the MFDC got too close. “Better to let your mangoes rot than to be killed.”

Bala is 36 now, and lives in a household of 30 (eight are children, all in school). He says things are a lot different these days: “In the past, it could take as long as three to five hours to get from here to Bafata, but now it’s a journey of ten minutes.” Bala says the new road makes it much easier for people to get to their fields, and also for buyers to come directly to the plantations. “The old road was narrow, and the bush was so thick anyone could be hiding in it. You were always afraid of being attacked. And it was so bad you could not drive on it.” The new road leads straight into the plantation where he grows his mangoes and cashews, and the completion of the road has allowed Bala to sell his produce at a much higher price to transporters from Ziguinchor. He says, “There is no greater peace than being able to reach your field, fetch your cashews or mangoes, when you couldn’t do that in the past.”

He is making more money now than he was before the road was built, and Bala is “investing in the family,” using his additional income to pay school fees and saving some of it up to rebuild his house. Reflecting for a moment, he says, “The conflict has negatively affected people. It has gone on so long and people have suffered a lot. Now, not everything is finished, but there is security, stability, praise be to God. This road gives us the opportunity to travel in safety. This project of USDA is a project of peace.” 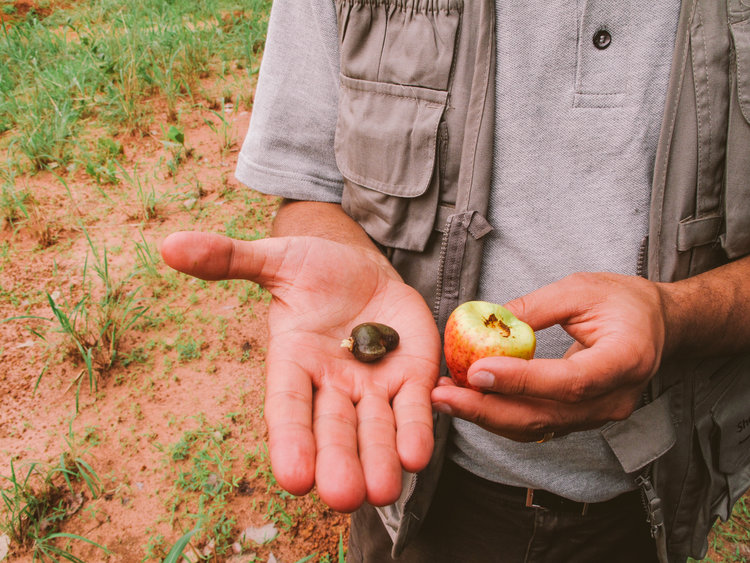 Cashew nut from a local farm