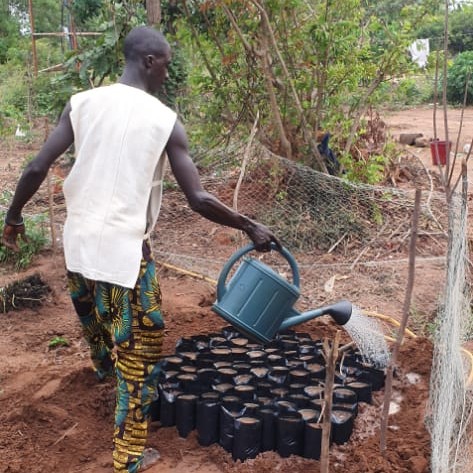 In April 2019, the LIFFT-Cashew Project (Linking Infrastructure, Finance and Farms to Cashews, run by Shelter for Life International (SFL)) partnered with the FAMVI (Federation of Associations for a Better Quality of Life in Villages_,_ or Fédération des Associations pour une meilleure qualité de vie dans les Village in French) to improve the quality of production and promote group sales. FAMVI, which is a cooperative comprised of 24 associations and 654 active members, is part of a program for developing organic production and certification. “For the first year, 100 producers are involved in our cooperative!” says Valentin Massal, who is a cashew producer from Simbadi Balante and vice-president of FAMVI. The LIFFT-Cashew Project was able to raise awareness of the program in cooperation with FAMVI in January 2020. By July 2020, FAMVI members received training on the general requirements for organic production, traceability, composting techniques, plant extracts, and organic certification.

Training in organic production requires that producers change their mentality in their practices, avoiding the use of fertilizers, pesticides and risks of contamination. The use of fertilizers contributes to the degradation of soils, pollutes water, damages human health, and disrupts the ecosystem at large. The organic production program encourages producers to change their practices by using organic manure for soil fertility instead of chemicals, and instead of manure from cows that have been chemically treated. Other applications including the use of plant extracts, such as Neem, in order to control pests instead of using chemical pesticides.

“Given the importance of the program, which contributes to human, water and soil health, and augurs as well as for a sustainable and environmentally friendly agriculture, I invite and encourage everyone who is a producer to improve our practices towards a progressive conversion to organic agriculture,” says Massal. According to Massal, the training “came at the right time” and allowed him to question empirical practices, while also giving the opportunity to make changes to existing production practices.

With the technical support of the LIFFT-Cashew Project and the involvement of producers, it is hoped that the organic program will become a real success. Massal is hopeful that more people will hear about the program. “Today, after this training, we will relay the project to the producers for a wider dissemination of the program, which is very beneficial for all,” he says.