Musa is 64 years old and has obtained formal education with a City & Guilds certificate in construction from a  recognized technical institute in The Gambia. He is married and has one daughter and two adopted children. He now lives with his wife, three grandchildren and two adopted children. Musa initially worked as a Head Mason for CARITAS for fifteen years, where he met with several cashew farmers and was inspired by how they used the profits from their produce to pay for their children’s high school tuition. After Musa’s work with CARITAS ended, he was a private contractor for a few years before deciding to go into cashew production. 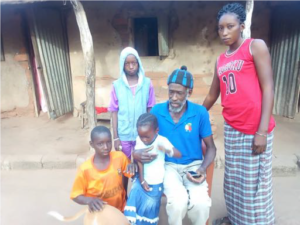 He is a cashew farmer in the border village of Amdalie in The Gambia. He is a founding member and President of the farmers’ association Cashew Senela Kaffo in the district of Lower Nuimi (NCSK) established in 1995. The association currently has 1,200 members including 175 female cashew farmers.

I became a cashew farmer in 1989 and currently own four cashew farms with a total area of approximately 6 hectares located in                   my village and another village. As the President of  NCSK, I want to see cashew production and processing grow and develop in the              district and beyond for the benefit of all cashew farmers.

NCSK and Shelter For Life entered into a partnership in March 2020 under the LIFFT-Cashew Project to address challenges faced by cashew farmers in the value chain, improve the competitiveness of cashew sector, improve yields and overall production. NCSK teamed up with Shelter For Life to conduct cashew farmer training on Good Agricultural Practices (GAPs) through the use of demonstration plots. Musa’s farm in Amdalai is 2.5 hectares and was selected as a demonstration plot for farmer training. In September 2020, ten (10) cashew farmers were brought to the farm to see demonstrated techniques of farm clearing, pruning and thinning of cashew trees at optimal distances for proper growth. For the training Shelter For Life provided a chainsaw to facilitate pruning and thinning on ¼ of a hectare, while another ¼ hectare was used as a control, measured but left untreated, to enable the comparison of results at the end of the season.

When asked about what he learned and his impressions about the demonstration, Musa said he has already started seeing significant results and differences between the two plots, observable by larger nut sizes. He estimates a 20% to 25% increase in yields for the cashew apples and the nuts. He was also able to start collecting his yields before other farmers started collecting theirs. 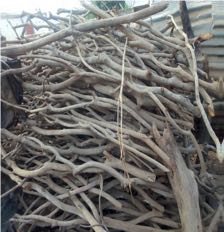 After the pruning, Musa was able to fill 35 donkey cartloads of firewood from the tree clippings and used half to make charcoal (37 bags, approximately 1,100 kilograms). He kept some charcoal and wood for his family, and sold 15 of the bags of charcoal, which earned him D 4,150 (USD $81).  In addition Musa harvested 455 kg in the demonstration plot against 309 kg in the farmer’s plot, which is a weight gain of 146 kg or D 6570 (USD $ 146). Mussa earned D 10 720 (USD $227). With these earnings, he bought foodstuff for his family from wholesale stores instead of going through typical village retailers, which allowed him to save more. He was also able to cover the tuition fees for his other adopted children.

“I want to thank SFL for the assistance from this project. My family and I are forever grateful for the support and assistance”, says Musa.